Time flies. Last year’s SX704 Solution Showcase at La Barbecue seems like just yesterday and that still seems awesomely surreal (from DJing for the Pharcyce to the crazy dope lineup to the unbelievably great food), so when the opportunity to throw a whole day’s worth of events came up this year, it was no-brainer. And so me and some friends (primarily France, DJ Trackstar & Dayta), set out to program twelve hours worth of Saturday fun at the biggest music festival in the country, bringing a mix of both Goodness & The Solution type flavor to the acclaimed BBQ spot. When everything was said and done on the morning of 3/15, the lineup was stacked with ridiculously talented MCs, DJs, singers and producers from all over the country and looked like this:

Extra stacked lineup, busiest day of SXSW and we were greeted by rain and fog on the morning of the event; not ideal at all. Regardless, we trudged through, set up tents over the turntables and stage and not too long after things got going, with the spot packing out quickly as Austin Goodness started with sounds from some of the best DJs in the country. From there, the weather cleared up, things somehow ran (mostly) according to schedule, despite a short break for a blown mixing board (which somehow got replaced in an under an hour, I credit good musical karma) and when the event wrapped up shortly after midnight, well over 30 top notch acts from NY to LA to Saint Louis to Denver and more had performed for hundreds of people.

CRL CRRLL’s awesome recap of his SXSW & the party

Over the course of the day, I met a ton of ton of new people and the main thing they said was that the event had one of the purest, best vibes they saw all week and that the day carried on the classic SXSW tradition of independent artists and musical discovery (I was even put on to some new favorites at my own event…LOL). To me and everybody involved that’s what it’s all about and we couldn’t be happier with how things turned out, especially when the overwhelming sentiment of SXSW 2014 is that it’s become too commercialized for its own good. With that said, see what the artists involved had to say about the event and check out pics of the day below (as well as even more pics here):

“Epic…Inspiring…Great feeling to be around so many great DJs Goodness, grooving, and [I] loved the crowd’s reception of us” – DJ Dozen (Denver)

“Amazing group of musicians playing records in the rain is the best way to start off SXSW at the Austin Goodness…Don’t forget the coleslaw!” – DJ Clockwork (Los Angeles / Mac Miller’s DJ)

“It was really nice to walk up to a fully relaxed situation with all of the craziness I had been experiencing before that day at SXSW. Turning left instead of turning up is just what I needed after playing intense party set one after another. Vibe at The [Austin] Goodness was on point and very welcoming. 5 stars.” – DJ A-Minor (Charlotte, NC)

“The show was dope. Good food and good performances. I got to see folks I never heard of killing it.” – YC The Cynic (New York) 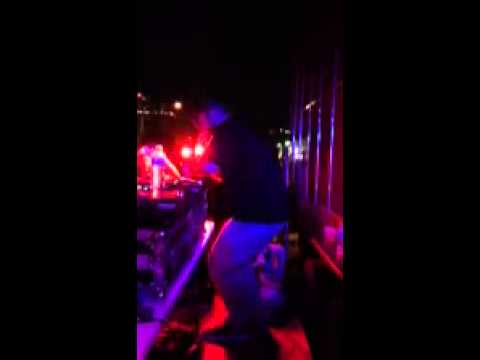 “I had a ball rocking at The SX Solution Showcase with my Dirty Science brethren. The food and the talent on the bill were top notch!! I’m already looking forward to next year’s bill! – Johaz of Dag Savage (Los Angeles)

“Between Goodness & The SX Solution, there was only one place you needed to be on Saturday at SXSW, La Barbecue. Great vibes, fantastic music and amazing food.” – Donwill of Tanya Morgan (New York)

“Goodness & The SX Solution Showcase were like a marathon of hot shit. The original purpose of SXSW, at its best, in one location.” – Von Pea of Tanya Morgan (New York)

“”SXSW is always dope cuz it’s like Mardi Gras in Austin a whole week. Mobbin’ all over the city running into other artists & fans from all over the country, rocking for new fans. The SX Solution Showcase was especially dope cuz everybody who performed not only killed it, but showed love to everybody else who rocked.” – Ness of Weekend Money (New York)

“I was honored to be there. My city was turned. God Bless you [DJ Low Key] for giving me a shot!! We just wanted to show and prove.” – Tef Poe (St. Louis)

“The event was the highlight of the week as far as shows are concerned, we had the opportunity to perform at four shows during SXSW and the La Barbecue show was the best one; most responsive crowd, best sound system, best food lol I thoroughly enjoyed myself, as well as all of the other acts I witnessed while I was out there. Also, much appreciation to DJ Low Key for showing STL love, it was great to see so many of my homies whom I feel are the best representatives of what dope music from STL sounds like, all on one bill, all down in SXSW, it was just a good feeling, and I appreciate that.” – Nick Menn (St. Louis)

“The SXSW Solution Showcase was my most important experience this year. It was a grand opportunity to perform new music and connect with fans and friends alike. Thanks for having me Low Key.” – Theophilus Martins (Los Angeles)

“The SX Solution Showcase was an unbelievable experience! The opportunity to perform in front of hundreds of new faces froma cross the U.S. for the time, in addition to Statik Selektah, Dee Woods (of Danity Kane fame) and Tanya Morgan was beyond awesome and very motivational.” – Slangston Hughes (New Orleans)

“I got put on to a lot of acts I’d never heard of and a lot of people got put on to me. I heard a lot of people complaining about how SWSX is so corporate now, but the big, overhyped shows were easy to ignore. I spent most of my time at smaller showcases like The Solution jawn. The food at La Barbecue was so good I couldn’t eat any meat for a week after I left Austin and now almost a month later I’ve just begun eating beef again. I knew I wouldn’t find anything comparable in NY.” – Spec Boogie (New York)

“The SX Solution Showcase was great opportunity for us to network, everybody was there!” – Travii of Bodega Brovas (Dallas)

“One of my favorite memories from this year’s SXSW was rocking at The Solution Showcase at La Barbecue. Got to meet a lot of great people and the food was some of the best BBQ I’ve ever had. Huge shout out DJ Low Key for making it happen.” – Catch Lungs (Denver)

“The [SX] Solution Showcase at La Barbecue was amazing. I had the opportunity to party with people that I’ve never met. I knew that they would dig me because they dig Low Key. The pulled pork sand which was off the chain too! ” – Turner Jackson (Denver)

“Family Affair’s experience with DJ Low Key at SXSW was everything that you could imagine as a upcoming artist. We were treated with the utmost respect even when our personal DJ was under the weather for show time. DJ Low Key without any hesitation assisted F.A with our show. The beer was unlimited it seemed like and the food was phenomenal! What I noticed different is that after every performance there was somebody ready to give them a hot plate of bbq as they exited the stage. We had our crew with us and we enjoyed ourselves so much we just stayed at the event almost til closing. As a band member we always pride ourselves on how the venues cater to our product and I can say this was one of the most humbling events with so much talent on one roster. Family Affair is looking forward to next years event without a doubt.” – Repp of Family Affair (St. Louis)

Me, celebrating an unforgettable event with some magically delicious ribs the next day.

SATURDAY, 3/15 from 4pm to midnight -> It’s that time of year again, things are warming up, it’s feeling like spring break and we’re beyond excited to announce this year’s SX Solution Showcase at La Barbecue (recently named the #13 new restaurant in the entire country by GQ Magazine, and it was pretty much the only one that wasn’t over the top fancy)!!! We’ve teamed up with one of our favorite music blogs/sites, Potholes In My Blog, our good friends at Akomplice Clothing and the one and only Leann Mueller Photography to build on last year’s unforgettable SX704 Solution Showcase and feature even more amazing talent from all over the country. And oh yeah, free beer all day with no cover, RSVPs or wristbands necessary to get in. So with no further delay, take a look at the ridiculous lineup for the party:

While Austin’s known for BBQ and there are many exceptional establishments in town, La Barbecue has a more renowned pedigree and pitboss than almost any spot in Texas (the yelp reviews explain things well here) and is generally considered to run neck and neck with Franklin’s (the one from the current Mastercard commercial with Chef Nobu) for the #1 spot in the Austin/regional BBQ hierarchy. Here’s a little more about La Barbecue:

“After one bite, I was convinced this is the best brisket in existence.” – AustinFoodstyle.com.

“His name may not (yet) carry the same level of recognition as Aaron Franklin or John Mueller, but make no mistake, John Lewis makes some of the best barbecue not just in Austin but in the state of Texas. From his massive handcrafted smoker on South First Street, Lewis produces tender, subtly smoky brisket with a bark that doesn’t get carried away with its bite. And his pulled pork has no peer in town.” - Austin360.com

P.S. If you came out to last year’s event, please note that La Barbecue has moved locations & they’re now much more conveniently located on 1200 E 6th St, right around the corner from the Fader Fort.